There’s a new titanosaur in town: Abdarainurus, described by Averianov and Lopatin. The holotype of Abdarainurus hails from the Alagteeg Formation of Mongolia, which was formerly considered to be the lower layers of the Djadochta Formation. It was collected way back in 1970, but only now has been studied.

Abdarainurus is only known from nine partial caudal vertebrae and some chevrons, which is not a particularly inspiring fossil, even by titanosaur standards. However, these happen to be some extremely weird caudal vertebrae, with several traits either rare in other sauropods or entirely unique to the new species. However, Darren Naish noted on Twitter that one of these reportedly unique traits—ridges inside the neural canal—is actually widespread in sauropods:

Other notable traits include the postzygapophyses being offset onto processes (a trait shared with the South American rinconsaurs and a handful of other species) and a pair of prong-like projections, which they dub the postprezygapophyseal process, in between the prezygapophyses.

The most important of these unusual traits is probably that the vertebrae are opisthocoelous—that is, the articulations between the vertebrae are convex on the front end and concave on the back end. The exact functional purpose of this configuration is unknown, but it suggests that the tail was adapted for bearing unusual forces. This configuration is extremely rare—in almost every other sauropod, either the back end of each tail vertebra is convex or neither end is. The only other sauropods with a convex front end in the anterior caudal vertebrae are Sonidosaurus and Opisthocoelicaudia, both of which are also from the Late Cretaceous of the Gobi.

Does this mean there was a group of titanosaurs with unusual tail specializations in Asia during the Late Cretaceous? Oddly, apparently not: in the phylogenetic analyses Averianov and Lopatin conducted, Opisthocoelicaudia and Abdarainurus wound up in very different places (Sonidosaurus is too poorly known to be included). I have to wonder if that result will be borne out by future studies, though—it would be a rather peculiar coincidence for the same unusual character to have evolved repeatedly in only one place in the world.

A couple days ago, I made a plan to write a short blog post whenever there’s a new paper on sauropods. Just to get into the habit of writing, you know? Well, the first sauropod paper since I made that plan has come out and there’s not a lot to say about it. I’m not sure whether that’s a good thing or a bad thing for my first blog post of this type.

Luis Gomes da Costa Pereira et al. describe five partial rebbachisaurid tail vertebrae from the mid-Cretaceous Açu Formation of Brazil. They show general similarities to rebbachisaurids from both South America and Europe, but their precise relationships cannot be determined due to their incompleteness. There isn’t a lot to say here, other than a minor range extension for rebbachisaurids, as these are the easternmost Brazilian specimens of the clade.

It’s that time of year again, when everyone does some kind of “year in review” post. I figured I might as well do one for non-mammalian synapsids, a subject which I find interesting that often gets overlooked in favor of dinosaurs.

One of the year’s most remarkable stem-mammal discoveries is the new varanopid Ascendonanus, from the early Permian of Germany. Ascendonanus is the earliest known arboreal animal and is known from numerous specimens with well-preserved soft tissue, showing that varanopids were scaly (Spindler et al. 2018). However, a restudy of the early diapsid Orovenator has led to the discovery that varanopids may be diapsids, not synapsids (Ford and Benson 2018).

A specimen of the tritylodontid cynodont Kayentatherium was found alongside a clutch of 38 babies, showing that unlike mammals, non-mammaliaform cynodonts were still r-strategists that didn’t invest heavily in parental care (Hoffman and Rowe 2018).

At nearly ten tonnes, Lisowicia, a new dicynodont from the Late Triassic of Poland, is the largest known non-mammalian synapsid and is neck-and-neck with contemporary early sauropods such as Lessemsaurus for being the largest known Triassic land animal (Sulej and Niedźwiezki 2018).

Dicynodonts weren’t just equaling the size of sauropodomorphs, they were living alongside them. A new dicynodont, Pentasaurus, has been discovered in the Lower Elliot Formation, making it a contemporary of early sauropodomorphs such as Melanorosaurus, Blikanasaurus, and “Thotobolosaurus,” and one of the few Late Triassic dicynodonts (Kammerer 2018).

A new edaphosaurid, Gordodon, is the fifth confirmed genus of this group of sail-backed herbivores. It had an unusually long neck for an early synapsid and an almost rodent-like tooth arrangement of incisor-like front teeth and molar-like back teeth, unique among such early land animals (Lucas et al. 2018).

Best of the year:

Around a year ago, I started this blog to post observations I had on phylogenetics. I never really followed up on that. Life finds a way to get in your way. But here I am now, trying to revive this blog.

I’ve been following paleontology online for years, usually as more of a lurker than a content producer. I sporadically tweet, use Tumblr, and post drawings on DeviantArt, but have never really been as active as I would like. With the doomsayers foreseeing Tumblr’s demise, I figure now is as good of a time as ever to start blogging more actively here.

This time around, I probably won’t stick to any particular theme. I hope to post miscellaneous thoughts paleontological every few weeks, depending on what catches my interest. I guess we’ll just see where this takes me.

Today I want to talk about one of the more unappreciated areas of phylogenetic uncertainty. Most of the time, you’ll see therapsid phylogeny depicted as a pectinate arrangement of Biarmosuchia, Dinocephalia, Anomodontia, Gorgonopsia, and Therocephalia as successively closer to Cynodontia. 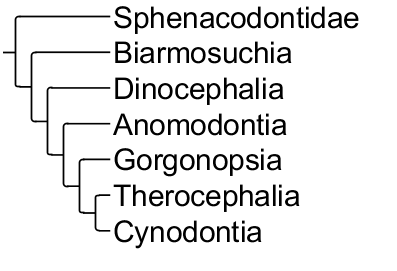 This is the phylogeny shown in review papers such as Rubidge and Sidor (2001) and repeated in textbooks such as Kemp (2005) and Benton (2005). Wikipedia uses it. More recently, it has become common to depict it as ambiguous whether anomodonts or gorgonopsians are closer to cynodonts, as in Angielczyk (2009) and this TetZoo article, but the tree remains otherwise the same.

But if you look at the phylogenies in the literature, what do you see?

You see a lot of different topologies, but nothing that matches the traditional arrangement perfectly. In fact, I can’t think of a single paper from the last several years which matches the “consensus” view of therapsid phylogeny—the only one I figured that gets close has anomodonts closer to cynodonts than gorgonopsians, which at least is acknowledged as a possibility in some more recent cladograms. Now, to be fair, some of these cladograms (C and D) are taken from outgroups of phylogenetic analyses that were primarily focused on the internal relationships of one specific group, and might not have had the data to accurately resolve the relationships outside of the group focused on. However, the overall variety in therapsid phylogenies is still interesting. Why is there this lack of consensus?

I’m not sure, and one of my goals going forward with this blog will be to look into just what’s going on here. More as this story develops.

I think phylogenetics is cool.

Reading phylogeny papers and investigating paleontological phylogenetic analyses are some of my favorite hobbies. I was talking with one of my friends the other day about some of the phylogenetic stuff I was doing, and they told me “you should start a blog,” so here I am!

I’m interested in a lot of different groups of animals phylogenetically, but some of my favorites to study are titanosaurs, Triassic reptiles, and basal therapsids. I’d say theropods, too, but frankly I think the professionals have those covered.

While I did major in biology, I’m not a professional scientist or a grad student. I think I know a lot about phylogenetics, though, and hope I’ll have something meaningful to say.

You can probably expect to see me review published phylogenetic analyses and attempt to code taxa into datasets that they haven’t been before. Maybe I’ll find interesting results along the way.